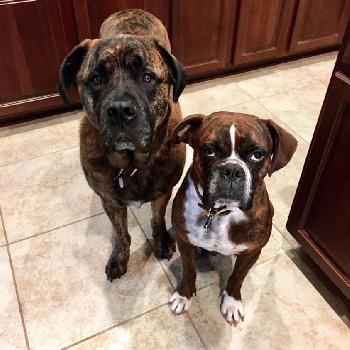 In November 2015, my husband John and I made the difficult decision to put our beloved boxer Brownie to sleep. Two years earlier, we had adopted our bullmastiff mix Kodiak (as a puppy) from LSBR. Brownie and Kodiak never really clicked, so I was hesitant to pursue adopting another dog right away. After about a year, John and I decided we were ready to look for another boxer through LSBR. After meeting one very young and energetic female boxer, we knew that we needed a dog with a much lower intensity level. That is when Leisha suggested that we meet Dash (even though he was a male). She thought that Dash's low energy would mesh well with Kodiak's personality. At the meet and greet, Dash was very timid and cautious. His foster brother came along for the introduction to help give Dash the confidence he needed. Kodiak seemed to respond well to Dash, and John thought that we should give it a go. I was more hesitant and unsure (like Dash was feeling that morning). But I trusted John's judgment, and we took Dash home. Dash was painfully shy at first, but he quickly became affectionate with us and with Kodiak, too. He immediately snuggled up and laid his head on Kodiak. How could we resist that? We couldn't. And so we formally adopted Dash and renamed him Sir Winston Churchill (Winston for short). His serious expression even resembles Churchill in a side-by-side comparison. In the months that followed, Winston slowly but surely has come out of his shell and gained more confidence. In the last couple of months, he has started to initiate play with Kodiak and not just freeze when Kodiak tries to play with him. He has also started having the normal boxer zoomies, and he loves to play with his toys. He is also spoiled rotten and sleeps in the bed with us. (He snores really loudly, too.) Winston can fall asleep the minute his head touches his pillow. I've never seen a dog fall asleep as quickly as he does. We just want to thank LSBR for rescuing our two furry loves. Our lives have been forever changed by them, and we are forever grateful. --The Speights