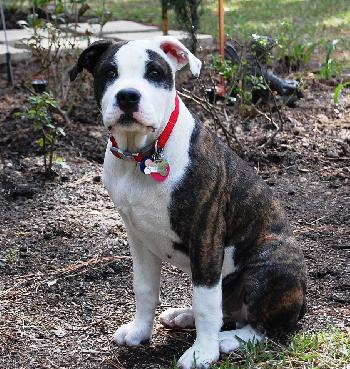 Humphrey was two years old October 26, 2011. He is a rescue boxer mix whom we adopted December of 2009 and gave him the name of Humphrey. His mother, Sissy, was abandoned while pregnant and gave birth shortly after being dropped off at Tails of Texas. She had a litter of ten puppies and as the puppies were born, they were given a number for a name.

We first met Humphrey when he was about 6 weeks old. We saw his picture before we ever met him. Our daughter sent us a picture of Humphrey while we were out of town and told us that she and her family would be adopting him. By the time we got back in town, she called to say that she was not going to adopt him due to her work and travel schedule and a puppy just didn't fit their busy life. She knew we had been talking about getting another dog and suggested we go see the puppies. We went to the kennel to see Sissy's puppies (10) and fell in love with #5 (which happened to be the one our daughter was going to adopt). Needless to say, Humphrey had our hearts and we brought him home the week before Christmas.

We had not considered a puppy as we had an 11 year old Lapso-Apso terrier mix, Harley, and at that time we were not sure how he would react to a puppy in the house. He had, and still has, that enduring, loving personality of a puppy that makes you want to hold and snuggle with him. It took about two months for Harley to accept Humphrey. He was not amused that he had to share his home and people. Now, they are best friends, running and playing together. Harley plays with Humphrey with an energy of a puppy and Humphrey has a new found respect for Harley, who can take him down by the jowls when he is fed up with Humphrey's pestering.

Humphrey is a sweet, loving and funny boxer mix and 70 pounds of muscle and love. Sometimes he thinks he is a lap dog and it is pretty funny at his size and weight. His favorite place to nap is laying on his back in my husband's lap with his feet in the air. At night he likes to snuggle up on the couch with me while I am watching television. He starts at the far end of the couch and slowly pulls his body towards me until his head is in my lap and one paw across my leg. Humphrey's personality fits perfectly with our family. One of his favorite things to do is roll around with our seven year old grandson. Additionally, he interacts well with the three other dogs of our daughters. He has become a much loved part of our family.

We are very pleased with Humphrey and Lone Star Boxer Rescue. This was a perfect match.