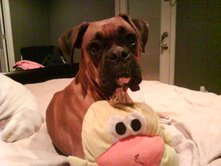 Mac
What can I say to each one of you but thank you so much for your kind thoughts and prayers for Mac. Most of you [at LSBR] I do not know but I do know Boxer owners are amazing.

I found my baby Wednesday afternoon and after 3 nights at Gulf Coast Hospital (collapsed lung) they sent him home with me Saturday to keep him comfortable for his upcoming hip surgery yesterday, sadly he passed away on the operating table. His little body just could not take all the trauma.

He was a loving, sweet, gentle boy who will be deeply missed. 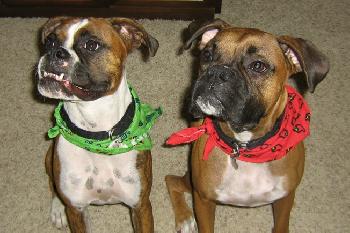 Macey and Jake
In 2005 Macey came into my life as a bouncing baby boxer, and stole my heart in every way. She had the biggest spirit and the most personality of any dog I’ve ever been around and she knew me possibly better than any human friend I’ve ever had. When Macey turned two we adopted our beloved Jake from LSBR. In fact I had picked out another boxer that I really liked, but when Macey met him she immediately disapproved. So, we met several others until she and I agreed that Jake was the right fit. He fit into our little family with grace and ease, like he had always been meant for us. They were opposite in personality, but both somehow perfect to me. Macey was smart as a whip, strong willed and determined, fast as lightning and agile in ways that astounded me. She mirrored my feelings in an uncannily accurate reflection…so if I was sad, she was quiet; if I was mad, she was nervous; if I was happy, she was content; if I was excited, she was EXCITED. Her vices were licking (everything and everyone) and eating random and bizarre things (bars of soap, bottles of lotion, bags of birdseed, peach pits…just to name a few). Jake was softer in spirit and aimed to please; he was hopelessly devoted to me and was fiercely protective of me and our home. Years ago when I lost a pregnancy it was Jake who crawled up on the bed with me and put his head under my hand to comfort me. He laid there with me while I cried…and that was my Jakers. His vice was drool…and those of you who knew him know he was an expert at sliming everyone and everything in his path! These two amazing pups saw me through several moves across the country, trying times in my marriage, trouble with fertility and eventually my divorce. They filled my bed and my heart when I was lonely and afraid…and for that I will forever be grateful. In 2012 when I brought two tiny babies (newborn and 11 months old at the time) into our home, they took it in stride as if they had been waiting for them just as I had been. I never could have imagined how easily and how patiently they would adapt to life with two small babies…but they did it, and I was so proud of and amazed by them. Macey left me in February, and true to form she never even showed me that she was sick. We woke up one morning and she was in shock…several hours later at the emergency vet we found out she had lymphatic leukemia and she was gone by that afternoon. It was a shocking and terrible loss. Then just three months later, my Jake went down on a Sunday and after 24/7 vet care for three days, began hemorrhaging internally from cancer in multiple organs and I had to let him go too. Jake was most likely in great pain, but he was stoic and sweet until the moment he left me. As Sug (another LSBR boxer) and I adjust to life without them, we will forever hold them in our hearts and will never forget the love and happiness they filled our home with. Until we meet again my loves… 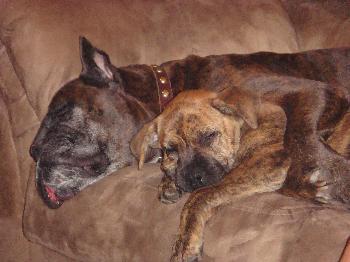 Mack
I wanted to let you know that we had to put Mack down yesterday. He had intestional cancer. We had a large growth removed 3 weeks ago from his back leg and it was cancer. He got sick as soon as we had it removed. In 2 weeks he had lost 16lbs., could not eat, drink, etc. keeping nothing down-thankfully he weighed over 100lbs. or he would not of been able to hang on as long as he did. We were hoping he'd get better but he just got worse, we took him back to the vet and they said that he had cancer all in his intestions. We could not watch him suffer anymore. A part of our family is now gone and will be missed forever-Mack was an exceptional dog--really more like a person. I can't explain how upset we are......he was my baby. But there is Trooper to help us through this.

Trooper is doing good. He is such a good boy and VERY smart. He helps us when we start missing Mack-he could sense something was wrong yesterday-every now and then he would whine. It is so sad, I know that's life but heaven sure received a very good boy (Mack)--I know God will take care of him. 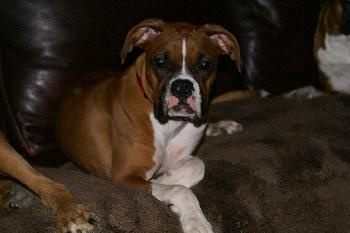 Macy
Sweet Macy. You won our hearts! You were by far the best foster we ever had. We will always miss you! Kent, Ariann, Ethan, Wyatt, Bear, Tegan & Nadia 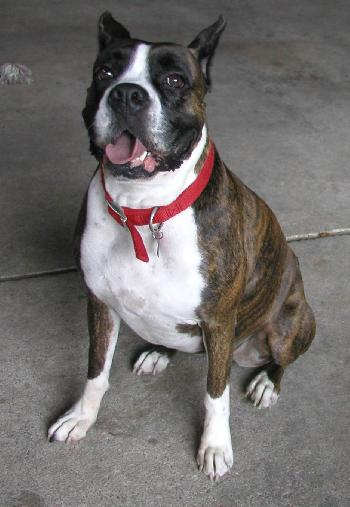 Maggie Mae
“Maggie Mae showed us the exquisite sweetness of comfort; the pride and elegance of being, the power of forgiveness, and the joy of strutting your stuff.

Maggie, you are loved.”

Thanks to everyone at LSBR who helped this magnificent friend come into our lives; especially Sharon Rheitman.

Maggie is survived by myself, her other daddy--Jim, and her Uncle Rogers; and Lucy Lou, an eight year-old fancy fawn boxer.

Love your way... you are Brilliant!