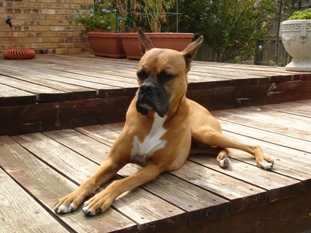 Rebound
Rebound came into our lives on July 22, 2001 and quickly became a beloved member of our family. Words are inadequate to describe his sense of loyalty and devotion. He appreciated every day we had together. We learned so much from him about patience, courage, and impersonal love. He departed on July 4, 2007, to be with his Maker. While we miss him greatly, we have the most wonderful memories of a true and loyal companion. It was our priviledge and honor to be part of his life. 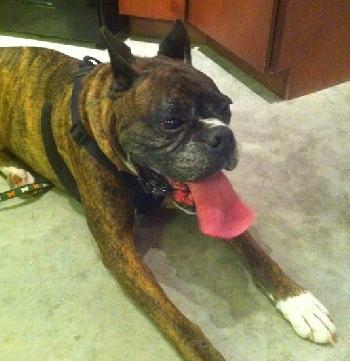 Reuger
Rueger Adopted 6-4-2011 Crossed the bridge 3-2-2012 Our dear sweet Rueger: You will absolutely be missed. You were loved as much as any human member of our family. It was such a blessing to have had you in our lives; although it was for too short of a time.You loved going on car rides, especially those with no destination other than to make you happy. You lit up when we would take you on long trips with us. You snored like your daddy, I sometimes couldn’t tell if it was you or him it was so loud and cute. I will miss you waiting at the door for me everyday with a toy from your box ready to play. Long walks were also one of your favorite things to do, you loved to know your surroundings and being outside. You loved the times you were able to go back and visit your Vicki and knew how much she loved you too. You showed us how you could love and protect us without wanting anything in return. You even defied odds and proved that you could behappy sharing your home with another dog who was in need. The short time we hadwith you was a true blessing and you have inspired us all. You will be missedand we know you are chasing that big cat in the sky. Someday we will meet againsweet boy. Shannon and Brian Everitt 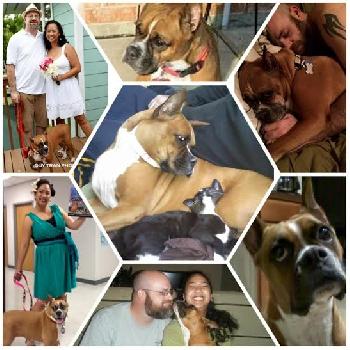 Rigby
Dear Friends, I wanted to share that our little princess, Elleminnowpea Rigby Piccolo Gorsuch, lovingly known as Rigby, Bebe, Iggy, Wiggles, Pickles, Rigobeta, Best Friend, Baby Girl and everything else we called her, went over the rainbow bridge Wednesday night to become a real angel. This came as a terrible shock and was so unexpected it's hard to explain how we feel. But if you know us, and how much we love our child, no explanation is needed. Our princess was so loving, that she waited till we were both doing something that we love, I was at Hula and Dave was at band practice, so that our hearts would be as full and happy as could be before we found her. She went into our closet, where she waits for both of us to get ready, shut the door (which she has never done in 6 years), laid down, and grew her puppy wings...she's probably flying around in circles right now! Rigby was the kindest soul imaginable, loved by everyone who met her. She cheered the souls of children in need at Ronald McDonald's House, kept a little autistic girl motivated and excited to learn and achieve her goals, was an ambassador for good behavior and learning in my class and school, helped two of my sisters overcome their fear of dogs, showed foster brothers and sisters from Lone Star Boxer Rescue what it's like to be loved again ( and pick up a few bad habits lol), broke the stereotype of cats vs. dogs with her best friend Kimbo, snuggled with her two legged brothers, loved her Gamma and Oma, howled at the moon and learned how to run in a straight line with Rocky and Dazy, loved little & black dogs like Paulie and Molly, and most importantly, showed me and David the true, pure, and uninhibited meaning of unconditional love. You will always be in our hearts Rigby. You are the gift that God gave us on Earth, to show us what we all needed to know about love, patience, and support. Watch over us and keep wiggling your little wiggle butt up in heaven. We love you. Friends, please consider honoring Rigby through Lone Star Boxer Rescue, and her Fairy Dog Mother (foster) Hopeful Hearts Rescue. All Dogs Go to Heaven, but we need to care for them here on Earth. We love you all. Hugs and Wiggles, The Gorsuch Family 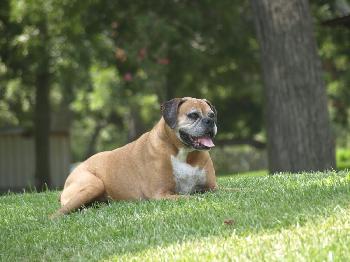 Riley
On May 29, 2011, around 7:15 p.m., our dear, sweet, beloved Riley crossed over the Rainbow Bridge. Riley spent his last few days where he loved to be the very most, at his lake house in Seguin. Though he tired a little quicker than normal, he had a great last morning playing in the yard and wading in the water then spent most of the rest of the day resting on his couch in the a/c, going outside every now and again to check on things... ever the watchful General. When Riley suddenly started displaying acute signs of the illness that plagued him for the last few weeks of his life, we knew it was time. We were able to get Riley to the emergency vet clinic in New Braunfels, where we held and comforted him as they helped him cross the Bridge. In typical Riley fashion, his passing was very peaceful and graceful.

As much as our hearts are breaking, we are very grateful to God for answering our prayers to allow us to be with Riley at the end. The last thing we wanted was for Riley to be alone or to experience any pain or discomfort. He was most certainly not alone and I think his discomfort was minimal. He was still giving us love and kisses up to the very end.

Riley enriched our lives for 10 + years. He was such a good boy and always made us so proud. The joy and love he brought to our lives and the lessons he taught us are beyond measure. Riley was always a source of comfort and love and he had a special way of taking you to a calmer, more peaceful place when you needed it the very most. I think everyone sensed a special quality in Riley and that is what endeared him to everyone who knew him. He was impossible not to love. Riley is missed by so many, including his brother, Woody (Pug), his uncle, Toby (long-haired Dachshund), his grandparents, extended family and so many friends. Riley was our big boy and he will forever occupy a big space in our hearts.

Riley, we know you will be there to greet us at the Rainbow Bridge, with that big smile upon your face. Until then, my love, you will most definitely live on in our hearts. 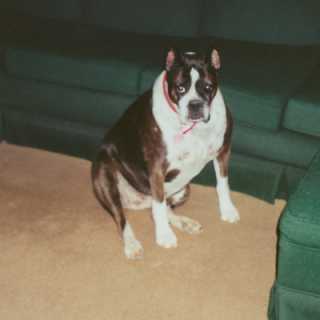 Ringo
A donation to Lone Star Boxer Rescue and this memorial were submitted in loving memory of Ringo.

"Defender of the Intersection, Queen of the Couch - a magificent creature in a suit of stripes, forever loved and desperately missed." Ringo - the World's Greatest Brindle.